Neanderthals in the Levant : behavioral organization and the beginnings of human modernity


Cave floor chiseling to accommodate the desired grave location and depth is also evident at the site. Thus, grave preparation was a sophisticated planned process, embedded with social and spiritual meanings reflecting a complex preagricultural society undergoing profound changes at the end of the Pleistocene. In the Mediterranean Levant, the earliest known burials involved disposal of the dead in sporadic and isolated pits dug in caves and their terraces.

Such burial sites are known at the caves of Qafzeh, Skhul, Tabun, Amud, and Kebara, all dated to the latter half of the Middle Paleolithic, ca. The bodies were usually interred in flexed positions, sometimes with selected animal parts placed on them. In all instances only a few individuals were buried at each site, likely reflecting intermittent burials.

These sites were not cemeteries in the modern sense, where frequent, repetitive interment and memorial events take place at a specifically dedicated location, usually for generations. Natufian [ ca. To date, more than skeletons have been unearthed in sites such as el-Wad Cave and Terrace, Eynan, Hayonim Cave and Terrace, Hilazon Tachtit Cave, Nahal Oren, and Raqefet Cave; these sites have several characteristics conceptually similar to modern cemeteries 6 — At each, at least several dozen burials were found in a delineated and densely used area.

Neanderthals in the Levant

The unprecedented density of graves and the great variety of inhumation practices in these sites represent some elaboration of earlier traditions and a wide variety of innovations. The new forms of burial include the combination of individual and multiple graves, flexed and full-length postures, patterned orientations, head and body decoration with beads, removal of the skull after body decomposition, use of ochre-based pigments, provisioning with grave goods and offerings, and possibly an association with funereal feasts 13 , Here we report on the discovery of grave linings made of flowering plants in four radiocarbon-dated 13,—11, Cal.

Natufian burials excavated at Raqefet Cave, Mt. Carmel, Israel Figs. Excavations at the site exposed 29 skeletons, all but one clustered in a small area ca. The retrieved skeletons include infants, children, and adults 14 , Most of the burials were single interments, although four were double, in which two bodies were interred together in the same pit. In the double burials, deaths were certainly contemporaneous or almost so, because the burials are simultaneous. However, the cause of death epidemic, accident, violence is unknown, and in most such cases is never identified A Location map of Mt.

B Major Natufian sites in Mt. C Plan of the Natufian burial area in the first chamber, Raqefet cave. See Fig. S3 for a section through graves Homo 28—Homo A Field photograph of skeletons Homo 25 adult, on left and Homo 28 adolescent, on right during excavation. Note the almost vertical slab behind the skull of Homo 25 and the missing skull of H Photograph reproduced with permission from E.

Photographs of plant impressions found at the bottom of graves. A Impressions under the skeletons of Homo 25 and Homo The long impressions are of square stems. B Impressions under the skeleton of Homo 1. Note the short, parallel impressions of square stems crossing long stems at the top center and the Y-like branching stems at the left. Photographs reproduced with permission from E. The current study focuses on the analyses of plant impressions in four graves Table S1. To document the complex formation processes in the Natufian graveyard, to refine the microstratigraphy, and to assess depositional and postdepositional processes, we collected sediment samples from all contexts in and around the graveyard for micromorphological studies SI Text , section S1.

We also sampled a wide array of deposits across the site for phytolith analysis SI Text , section S2. These samples include 16 samples from eight burials, 12 samples from four bedrock mortars, and seven samples from other contexts and from naturally accumulating soils located away from the cave's entrance Table S2. In thin sections the grave fills appear as heterogenic calcareous ash deposits mixed with comminuted charcoal, bones, local soil, gravel, and snail shells SI Text , section S1 and Fig.

S5 A and B. The uppermost part of the anthropogenic deposits was strongly affected by bioturbation, manifested as a loose consistency, high porosity and crumbly structure Fig. S5 C and D. Significantly, bioturbation acted mainly on a millimetric scale and decreased considerably with depth. Several graves rest on hard limestone bedrock with a distinct upper layer altered by weathering into a porous, friable crust, 2—3 cm thick, that does not effervesce with diluted hydrochloric acid, upon which a mud veneer, 2—3 mm thick, is present.

S5 E — H provide data regarding the microstructure, elemental composition, and postdepositional diagenesis of the initial calcite in the limestone bedrock. SEM observations show that the crust has an amorphous microstructure with fractures Fig. On a microscale level, the crust shows variations in chemical composition which appear as different shades of gray Fig.

However, EDS measurements in both brighter and darker areas are similar and apparently reflect the presence of two different mineralogical phases; one is a phosphate mineral phase, and the other is an alumosilicate phase revealed by peaks of silicon, aluminum, and potassium Fig. The presence of alumosilicates is probably the result of a mud veneer on the phosphatic crust. Preservation conditions hamper full characterization of the veneer and its postulated plaster-like utilization.

A mud plaster was found lining the inside of a Late Natufian grave at Hilazon Tachtit 12 , The veneer at Raqefet Cave contains impressions of stems, leaves, and fruits and hence must have been damp and in a plastic state during the burial event or immediately thereafter, allowing soft delicate plant tissues to leave their precise impressions. The largest number of preserved plant impressions was discovered in the double burial of Homo 25 and Homo 28 Figs.

The two skeletons were found lying on their backs, parallel to each other with their elbows juxtaposed. One was a to y-old adolescent Homo 28 placed with the knees folded to the left. The skull was ritually removed from the grave at a later time, after flesh decomposition. Homo 28 has been directly radiocarbon dated to 12,—11, Cal.

Table S1 and Fig. Homo 25 was an individual over 30 y old placed with his knees folded to his right. This individual had a stone slab set vertically behind the head, which was facing upwards. The head and slab were naturally dislocated in the grave and fell on their side, after body decomposition Fig. At the base of the grave we recorded more than 30 impressions; we identified 13 stem impressions, 3—15 cm long and 0.

One set of impressions was identified as the flowering stems of Salvia judaica Boiss.

Judean sage Fig. Other rectangular stems belong to sage and closely related species of the mint family Labiatae or to the figwort family Scrophulariaceae. Species of these families currently grow on the terrace and slopes below the cave. Local plants of these families flower in spring; most have a strong, aromatic fragrance, and some possess medicinal properties. The stems become stiff in April—May and begin to deteriorate after desiccation during the summer. Thus, the impressions on the veneer were formed before midsummer.

Photograph reproduced with permission from A. C and D Jigsaw-puzzle phytoliths indicating tissue of a dicot plant. These phytoliths are associated with the graves and are also found in Salvia species growing near the cave today. Photographs reproduced with permission from R. The double grave of Homo 18 and Homo 19 is unique because it preserves data regarding a preparation phase preceding the floral lining.

Here, a bedrock bulge on the cave floor was chiseled to serve as an inner wall of the grave. The chiseled surface is ca. S4 A and B. 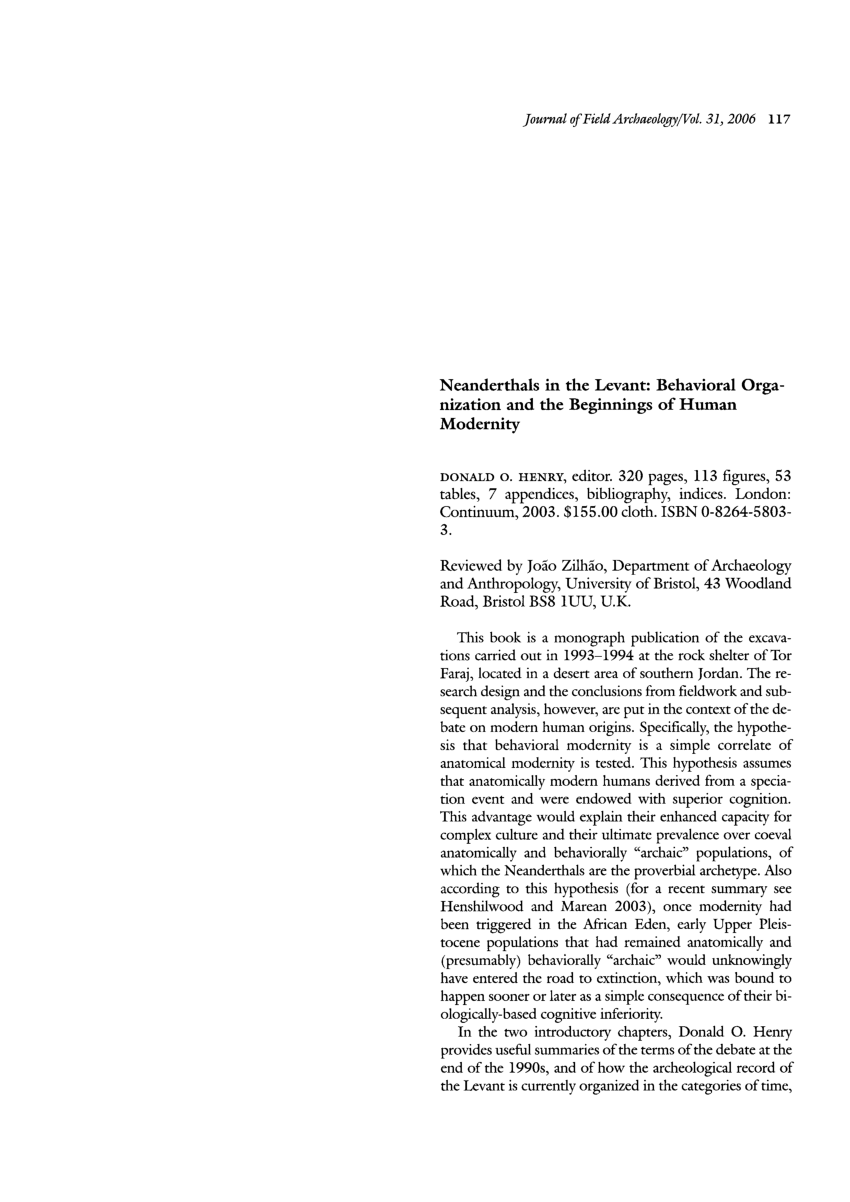 Only after the modification of the rock were the veneer and plant lining set inside, as indicated by the impressions of reeds Phragmites? We identified another dense set of impressions at the base of the Homo 1 grave; it was exposed 40 y ago, although at the time the impressions were not observed Here, there are several examples of square stems crossing each other at right angles and in regular intervals, seemingly in a loose net-like arrangement of the lining Fig.

Impressions of stems with round cross-sections were exposed immediately under the skeleton of a child Homo 31 Fig.


S1 A and S3. Apparently, the practice of lining graves with flowers was not age-related, according to the Raqefet burials. This finding is not surprising; when children were not excluded from the rest of the dead community usually they were , their treatment did not substantially differ from that of the adults The plant impressions were restricted to the burial area. No similar remains were observed elsewhere on the cave floor or cave walls. Furthermore, no flint, stone, or bone impressions were found in the graves despite the presence of thousands of these hard and durable artifacts within the grave fills.

This finding suggests that the green lining was thick and continuous, covering the entire grave floor and sides, preventing other objects from leaving impressions on the mud veneer. The abundance of phytoliths recovered from eight graves provides additional evidence for the habitual use of plants in the Raqefet Cave burials Fig. Phytoliths were identified in 35 contexts in the cave and on its terrace, including control samples. They consist of morphotypes from grasses, dicotyledon leaves, reeds, and sedges. The average density of samples from the eight graves is 61, phytoliths per gram of sediment, whereas the average for the off-site control samples is only 27, per gram.

The density of dicot phytoliths found in graves at Raqefet Cave is unique for phytolith concentrations at Natufian sites and supports the suggested use of large quantities of shrubs in the burials. Our recent study summer revealed that phytoliths of local Lamiaceae species including Salvia fruticosa fall morphologically within the group of dicotyledonous phytolith morphotypes and thus may be one of the taxa used as grave lining at the Raqefet Cave burials Fig.

The Homo 28 skeleton was dated to 12,—11, Cal. The dates indicate that the site was used for burial, repeatedly, in the same confined area and with the same customs and grave preparation, likely for as long as about 2, y. The characteristics of the burial customs 6 , 14 , the flint assemblage 15 , and the bedrock mortars accord with these dates.